Maria Popova's work explores the intersection of politics and law in the post-Communist region, specifically the rule of law, judicial reform, political corruption, populist parties, and legal repression of dissent.

Disclaimer: The European Commission's support for the production of these publications does not constitute an endorsement of the contents, which reflect the views only of the authors, and the Commission cannot be held responsible for any use which may be made of the information contained therein.
DOWNLOAD CV
BOOK
JOURNAL ARTICLESBOOK CHAPTERSBOOK REVIEWSOTHER ACADEMIC
WRITINGPOLICY ARTICLES
& OP-EDSRECENT INVITED TALKS 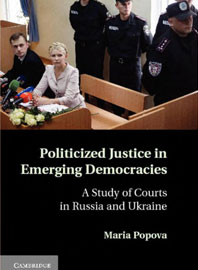 Politicized Justice in Emerging Democracies: A Study of Courts in Russia and Ukraine

2012. Cambridge University Press.
Why are independent courts rarely found in emerging democracies? This book moves beyond familiar obstacles, such as an inhospitable legal legacy and formal institutions that expose judges to political pressure. It proposes a strategic pressure theory, which claims that in emerging democracies, political competition eggs on rather than restrains power-hungry politicians. Incumbents who are losing their grip on power try to use the courts to hang on, which leads to the politicization of justice. The analysis uses four original datasets, containing 1,000 decisions by Russian and Ukrainian lower courts from 1998 to 2004 in two politically salient types of cases – electoral registration disputes and defamation lawsuits against media outlets – as well as data from interviews with judges, lawyers, litigants, and judicial administrators. The main finding is that justice is politicized in both countries, but in the more competitive regime (Ukraine) incumbents leaned more forcefully on the courts and obtained more favorable rulings.
READ MORE